Guide to Using your Favorite Headphones on PS4

Listening to Clean Music – Cleaning Earwax Out of Earbuds

Can you Use Regular Headphones on PS4? 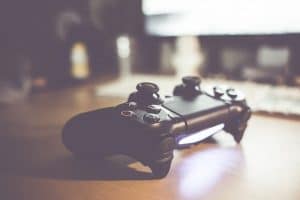 While Sony’s PlayStation 3 was surpassed by Microsoft’s Xbox 360 from 2005 to 2013, the tide shifted in Sony’s favor late 2013. Sony’s sales reached 14.59 million units in the preceding year, leaving Xbox and many others far behind in the console race. The PS4 box included the console itself, one controller, and a dedicated one-ear PS4 headphone.

When released, one prominent feature of PS4’s DualShock controller was a 3.5mm headphone jack at the bottom that allowed users to listen to in-game chat and other player-oriented information in single-player mode.

One example of this is in the “Kill-streak announcement” in Call of Duty, be it during player vs. bots or a PvP match. In Middle-Earth, Shadow of Mordor (2014) and Shadow of War (2017), the DualShock controller emitted the ‘slash’ sounds when entering a combo. The higher your combo, the louder the sound was.

While some found this troublesome, it was a cool feature nonetheless for many. Soon, users wanted to use regular headphones on the PS4, ranging from hearing just the controller sounds all the way to complete audio.

This gave way to the question can you use regular headphones on PS4?

The simple answer to that question is yes. Whether you want to listen to just the conversational or the full audio, Sony allows you to do so.

How to Use Regular Headphones on PS4?

Most late night gamers complained of the controller sounds, deactivating which is easy. Simply long-press the PS4 button, go to Sound/Devices> Volume Control > select the controller option and turn it to zero.

But what if you want to use regular headphones on PS4 to listen to the complete game audio?

The Cellular Telecommunications Industry Association (CTIA) has standardized that all smartphone, PS4, Xbox, and other accessories must have the default layout of headphone jack. The contacts must be arranged in the following manner;

Only headphones with this layout can work with a PS4 properly. This is part of the reason why Apple EarPods’ microphones don’t work on PS4.

Following are some of the most recommended third-party headphones you can use with the PS4 for a great experience.

This list isn’t extensive and can include many others that can give you a good PlayStation experience. Just make sure when buying a new headphone for your PS4 that it follows the CTIA standard, not OMTP.

Once you’ve selected the headphones you want to use with your PlayStation, it’s time to set them up.

Despite the popularity of wireless headphones, most gamers still prefer wired headsets for their PS4. People claim that this is because they don’t have to worry about having to charge their sets, while others claim that there is just something reassuring about a wired headset that wireless simply cannot provide. This, of course, is all up to the user. Neither is better or worse than the other.

To plug in regular headphones into your PS4, simply;

Remember to test your microphone by choosing the Adjust Microphone Level.

Much like the Nintendo Switch, PS4 only has a Bluetooth port for its controllers. In order to connect your favorite wireless headphones to PS4, you need to invest in a Bluetooth dongle. Once the dongle is in place, it’s as simple as connecting your headphones to the dongle and repeating the above-listed process.

Consoles have presented an affordable alternative to expensive and powerful PCs, letting people with limited budget play high-end games, sacrificing either only the graphics quality or the framerate. The Witcher 3, for example, sacrificed only framerates to be playable on the PS4 and Xbox One.

With the option of using regular headphones on PS4, Sony has allowed players to regulate the sound quality they get. To use them, simply follow the above steps and enjoy games with your favorite headphones!

Read our article on The Best Gaming Headphones Under 100 Here

Also Check Out: What is Mic Monitoring