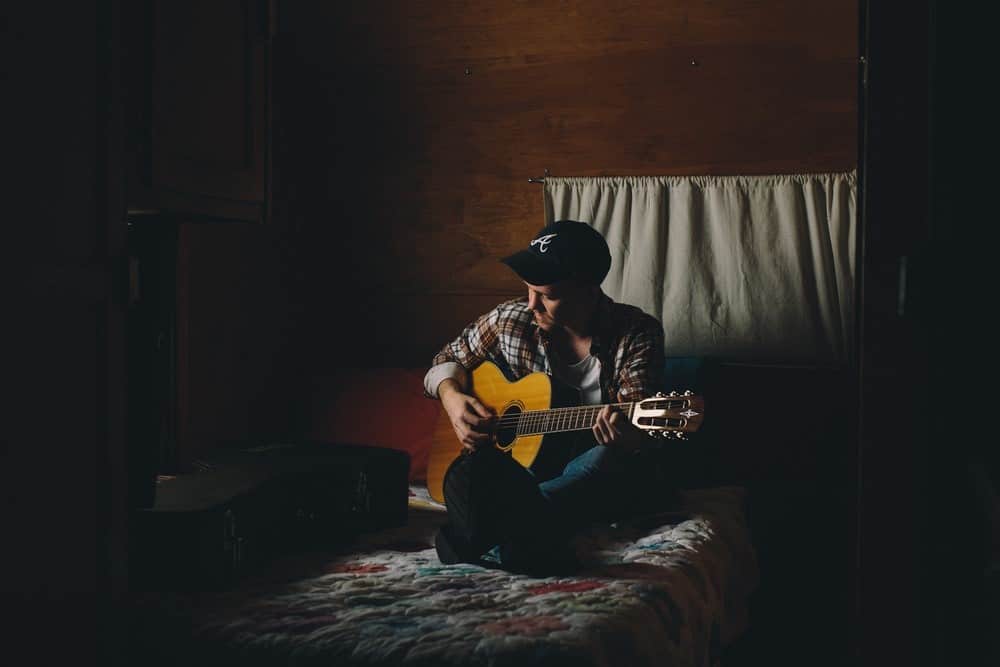 Beginner guitarists can do a lot worse than learning some easy, simple songs. For the very early steps, it helps if the song has only a couple of chords that you can switch between, back and forth. This helps to cement your ability at chord changes and get you playing much faster in the long run.

Better yet, 2-chord songs can be very fun to sing along too, whether you’re by yourself or with a group of friends. We’ve gathered here some of the classic rock songs that work perfectly as easy 2-chord guitar songs for beginners:

For What It’s Worth – Buffalo Springfield

Born in the USA – Bruce Springsteen

Springsteen’s anti-war song is widely considered one of the greatest songs of all time. The ironic, sardonic lyrics about the indifferent treatment of Vietnam War veterans and the powerful rhythmic chorus make this song unforgettable. It uses only two chords: B major and E major. This how-to-play lesson will help.

A Horse with No Name – America

The folk-rock band, America, has churned out quite a few relatively unknown classics. This one was given new life because its cover was used for the Netflix show, BoJack Horseman. The almost mystical, Western song uses a couple of variations of E minor and D major, but it shouldn’t be too difficult as this video will show.

This late-seventies chart-topper is a Fleetwood Mac classic, and quite easy to play! With only an F major, G major, and a powerful strumming pattern, you can nail this song. Here is a great cover lesson for the song.

Break on Through – The Doors

The Doors’ groovy, rock n’ roll spirit is captured well with ‘Break on Through (To the Other Side)’. This is one to sing along to with all your heart, and surely a fun rhythm to play! This might be a bit difficult, but it will help you switch chords faster. Check out this tutorial. In time, you’ll be playing the actual riff along with the backing track or rockin’ out with a live band.

The Beatles’ melancholic classic is another 2-chord guitar song that sounds lovely (and makes people think you’re an accomplished guitarist). The E minor and C major progression are easy enough to play, but when you throw in those easy variations of E minor, the chorus really augments the whole piece. Here is a tutorial to help you figure it out.

Written by Lou Reed, the Velvet Underground song created some controversy when it was first released. Though the subject matter is another thing, the song itself is a psychedelic experience. Who knew you could do so much with just two chords?

In this case, it’s a D major and G major – though you might want to tune the guitar down a half-step to match the original recording. The strumming starts out slow and airy and quickly builds up speed and momentum. Here is a short tutorial to get you around the basics.

This rock n’ roll classic was famously used in Quentin Tarantino’s Pulp Fiction. With only a G major and D7 chord, you can play this chord. Though if you’re struggling with the D7, you can simply play a D major chord. Here is a tutorial for the acoustic parts. If you want to learn the iconic rock n’ roll riff in the intro, you can push your boundaries a little and explore the fretboard this way.

Holding chords can be difficult for beginners starting out, which is why the songs in this list don’t use any complex chords. You should try to learn the chords here by heart. This will help you a ton in your guitar journey as many of the chord shapes are shared in different songs.

We hope these easy 2-chord guitar songs for beginners will help you quickly come to grips with playing songs. Good luck!