JBL Charge 3 vs Flip 4: they look similar, but that’s about it

Jaybird X2 Review: Why these headphones are BETTER than AirPods for Physical Activities 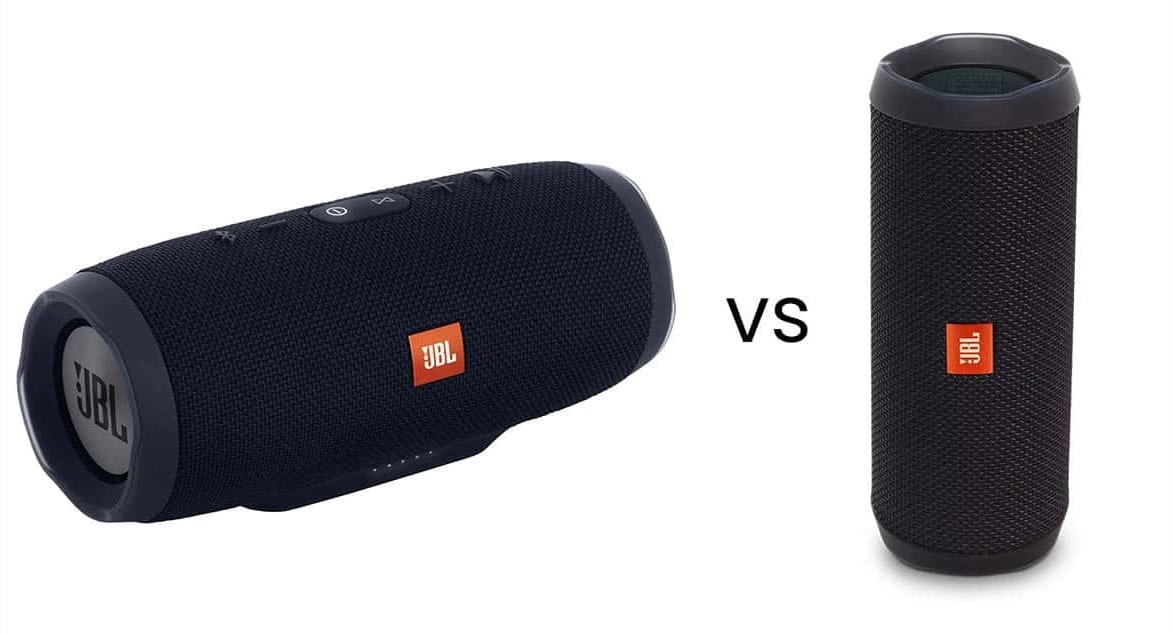 Looking for a new wireless speaker, two alternatives by JBL caught our attention immediately. Both the Charge and the Flip models seem to have a lot going for them, although they look awfully similar. To make our decision simpler, we decided to see compare them side by side. That way, spotting the significant differences between the two is easier. Which one would win in a match pairing the JBL Charge 3 vs Flip 4? We finally have an answer.

Before comparing the JBL Charge 3 vs Flip 4, we need to talk about wireless speakers first. In our opinion, finding the best ones requires that you keep the following in mind:

The most pressing factor when you’re buying a new wireless speaker is the audio quality. Although you can’t expect the same fidelity that you get from wired home sound systems, you can get something similar. Usually, bigger speakers sound better given that they’re made by the same brand. However, comparing different brands is more complicated in that regard, because they might employ different technologies in their products.

Typically, bigger speakers are also more bass-driven, which makes them great for parties or similar occasions. The tuning will be different in each model, making a sound test almost mandatory to ensure a satisfactory purchase.

If you decided to go wireless, then you might as well make the most out of it. Wireless speakers have the advantage of being easier to carry around than the traditional choices. However, if you want to enjoy the freedom of a no-strings-attached kind of deal, you should avoid the larger alternatives.

Unfortunately, larger speakers might sound better than small ones, which begs the question: how much are you willing to compromise? Finding the perfect match for your needs will be a matter of balance. When you manage to find a solid middle ground, don’t let it slip.

Portability comes with the downside of exposing your wireless speakers to potentially harmful scenarios. Your ideal speakers need to be tough enough to come unscathed shall things go awry.  If you want to take your music with you regardless of the setting, there a few things to check first.

Above anything else, the construction quality will have the biggest role to play in that regard. Additionally, features like shock and waterproofing will further increase your speakers’ versatility. Sadly, these features aren’t too common in low and mid-range wireless speakers. However, finding a suitable candidate that won’t break the bank is doable if you know where to look.

Going wireless can either be a blessing or a curse depending on your Bluetooth version. The first iterations of the Bluetooth protocol were full of connections drops, poor data transference, and the like. However, Bluetooth has improved a lot with each update, now being almost as reliable as a wired connection.

Besides, newer Bluetooth protocols also included fresh features like multiple simultaneous connections, improved power-efficiency, better coverage, and more. There’s still a slight difference in audio quality between wired and wireless speakers but is barely noticeable now. Small enough to be compensated by the practicality of wireless alternatives, in any case. 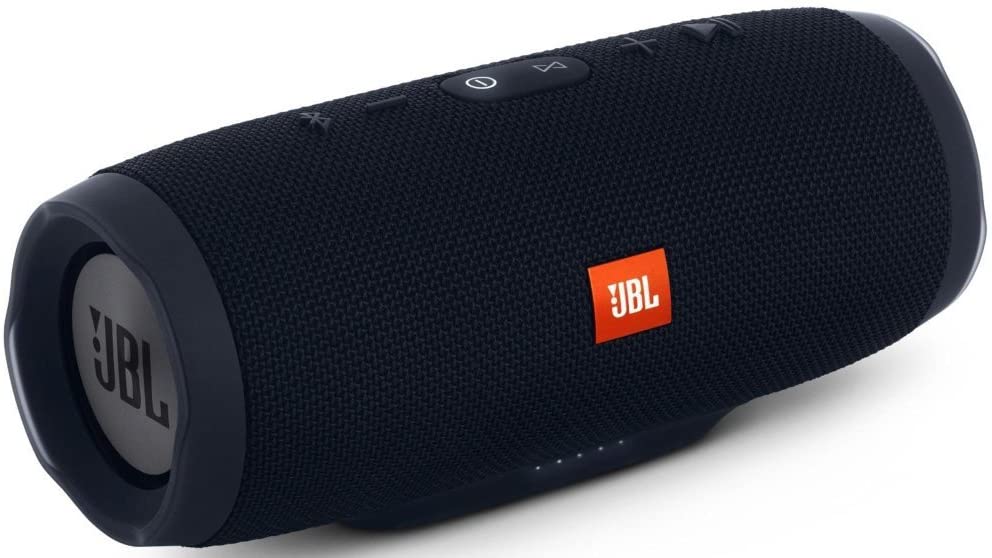 These two alternatives by JBL look alike, but that’s where the similarities end. Despite their appearance, the Charge 3 and the Flip 4 offer very different listening experiences. In the same way, each one is better suited to accommodate a particular setting.

Still, deciding between the two of them feels more complicated than it should be. To make things easier, when decided that we needed to see how they stacked against each other. Comparing the JBL Charge 3 vs. Flip 4, we concluded the following:

A good place to start comparing the JBL Flip 4 and Charge 3 is their design. Merely looking at them you can tell that they’re meant to serve different purposes. The JBL Charge 3 is bulkier and heavier which implies a bigger burden to carry around. However, the Flip 4 was conceived as a portable device first and foremost.

Consequently, the Flip is the kind of device that you can keep in a small purse or a big pocket. Although the Charge is also a portable speaker, it seems more appropriate for longer trips or regular use at home. If you aren’t carrying it in a backpack, it can be quite burdensome.

Furthermore, they’re both have a cylindrical shape that makes them great at distributing the noise through a room. Also, the Flip feels nice and confident while standing, but Charge 3 seems better off laying down. Besides, both have an IPX7 rating, meaning that they’ll withstand around half-an-hour of total submersion.

Which one sounds better?

To find the best wireless speaker among the two, both devices were subjected to a rigorous sound test.  In general terms, both the Charge 3 and the Flip 4 sound outstandingly well compared to other wireless speakers. Surprisingly, although both speakers are made by JBL, their sound profile is remarkably different. Choosing one over the other, unfortunately, is complicated, mostly because judgments are often subjective in these affairs.

Nonetheless, is easy to notice the places in which both of the speakers feel more comfortable. For instance, both could easily outperform most other wireless speakers at the lower ranges. The Charge’s bass is considerably more powerful, but that’s to be expected with its bigger size.

And, as we move up to the higher ranges, things get more interesting. The JBL Charge 3 has an impressive mid-range that delivers crisp and vibrant tones in such a crowded frequency. The Flip, on the other hand, finds its sweet-spot higher, with trebles soulful enough to send shivers down your spine.

This is where the Charge 3, being the most expensive one of the two, gets to shine. The JBL Charge 3 owns its name to one of the speakers’ biggest selling points. It doubles as a power bank, allowing you to plug two devices into the speaker to charge them on the go.

Also, both have JBL Connect, a special connection that allows them to sync with other JBL devices. When you have multiple speakers paired with JBL Connect, they work together, turning into an integral sound system. However, the Flip 4, as the newer model, is compatible with JBL Connect +, an improved version of this technology. Sadly, Charge 3 isn’t, although the Charge 4 does have this feature.

Aside from that, these two are fairly similar in their functionality. Both have mics and allow you to interact with Siri or Android’s assistant. The mics are fairly good as well, which is odd. Unless you’re planning on taking any phone calls using either of these devices.

In this area is where the Charge 3 and the Flip 4 differ the most. Although the Flip 4 has a technical advantage because it has Bluetooth 4.2, the JBL Charge 3 allows more simultaneous connections. While the Flip 4 only can have 2 paired devices at the same time, the Charge 3 raises that number to three. And, since the newer protocol doesn’t come with any improvements on audio playback, Flip’s advantage is even more marginal.

Their batteries are an entirely different matter, however. Once again, the Charge comes out on top due to its sheer size. It’s bigger, and it has a huge battery that can last more than 20 hours on a single charge. The Flip’s 12 hours battery should be good enough for anyone, but the Charge is simply in a different category. But keep in mind that it’s also more expensive, which would understandably make comparisons seem one-sided.

Which is better JBL Charge 3 or Flip 4?

With diverging sound profiles, connections, battery life, and other significant differences, deciding between the two is hard. For the money, the Flip 4 is a solid choice if you’re mostly looking for portability. However, in terms of performance, the Charge 3 has a slight advantage because it’s bigger. However, it’s also pricier, so comparisons between the two are a bit unfair.

Can you adjust bass on JBL Charge 3?

Using the buttons on top of the speaker, you can adjust the bass of your JBL Charge 3. For ten seconds, hold the lower volume and Bluetooth buttons to change the settings. This will either activate or deactivate the bass boosting features in your JBL speaker. To revert to the previous setting, simply press the device again for ten seconds.

Stacking the JBL Charge 3 vs Flip 4 shed some light on the differences between the two. Although the Charge is bigger and louder, the Flip 4 has a few technical advantages like the improved connection. Moreover, the portability of the latter is superior to that of the Charge by a wide margin.

If you’re looking for the best sound, the Charge 3 seems like the best candidate for you. The fact that it lasts longer and doubles as a power bank makes it the most well-rounded alternative. Nonetheless, if what you want is something that sounds great and can fit anywhere, go with Flip 4. Its battery still lasts 12 hours, which is okay, and it also feels harder to break.