The Power of Simplicity: An AKG K701 Review 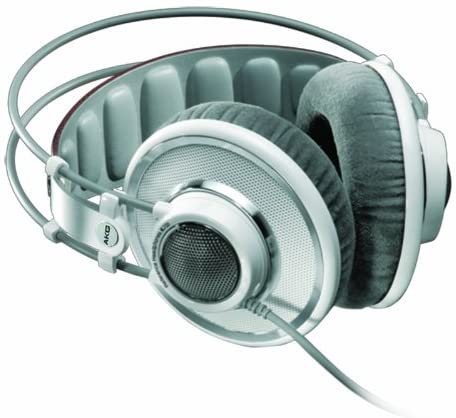 As audiophiles, we’ve always struggled to find headphones that weren’t too heavy on the lows. Recently, a friend suggested that we try an alternative by AKG Acoustics. Given their reputation, we followed his advice and decided to write an AKG K701 review in the process. We’re very picky when it comes to our music, so meeting our expectations isn’t a walk in the park. Were these as good as they seemed? Let’s see.

To understand the topics we’ll be discussing, there a few things you should know first. When buying a set of wired headphones, you should be mindful of the following things:

If you’re investing in a quality set of headphones, their sound should be your main concern. Headphones don’t have the same limitations as earphones, so there isn’t a reason to settle for anything less than great. The drivers’ size, as well as their quality, would be the ones ensuring your listening pleasure, so invest accordingly.

Additionally, you can purchase a headphone amplifier to get the most out of your headphones. Particularly among the higher-end alternatives, using an amp delivers a significantly richer experience. Those aren’t too expensive and are a must-have for audiophiles and passionate music-lovers alike.

There’s a heated debate regarding whether you should go open-back or closed-back when you’re picking headphones. The experience you’ll get will heavily depend on your choice, so be cautious.

Closed-back headphones could be considered the standard, and their enclosed cans give you a solid noise-isolation. Nonetheless, the open-back design has its own set of merits. Although you won’t get noise-isolation, the sound blends nicely with the ambient noise in quiet environments. Using them, you don’t feel like you’re wearing headphones, which paired with a good sound-stage translates into a one-of-a-kind experience. However, in loud environments, the ambient sound will get in the way, which is very unpleasant.

Headphones range in price considerably, going from $50 to $500 in the blink of an eye. With a bigger price tag, you’ll also have to add more safety measures to protect your investment. Unfortunately, judging the quality of a set of headphones from a glance is unreliable at best.

A common way to go about was to estimate their construction quality by weight. Sadly, brands are aware of that, and often include heavier materials just for the sake of feeling “sturdier”. Personally, we don’t trust any claims of durability unless proven otherwise. To be on the safe, we also prefer buying from trustworthy brands, despite the bigger price tags attached.

Aside from the above mentioned, there are other elements that you need to consider before buying headphones. The cord’s length, for instance, needs to fit the use you’ll be requiring from your headphones. These cables come in many sizes, materials and some headphones allow you to disconnect them from the cans.

You may need to purchase adapters to plug your headphones if you’re connecting them to amps, keyboards, and similar devices. 65 mm audio jacks are common in high-capacity audio hardware, which means that you might have to plan accordingly. Thankfully, those aren’t particularly expensive, so it shouldn’t set you back too much.

We wanted to add an open-back alternative to our modest home studio, and these had a great reputation. Many times, we were asked to give them a try, but we were initially skeptical. We agreed to try them just so we can write an AKG review afterward.  However, we stand corrected because they turned out to be everything we wanted, and then some. In summary, the highlights of our experience with the K701 were:

Sound-wise, the AKG 701 is a very interesting choice. Unlike most headphones, their tune stays as authentic as possible, without common audio enhancements like bass-boosting. This results in a particular experience that would check an audiophile’s biggest boxes, due to their high fidelity and detail.

Bass-heads might be put out by the lack of an overemphasized lower range, but these fare well enough without it. Their lows are still rumbling, powerful, and deep, just not trying to take the main-stage all the time. And the higher ranges, particularly the vocals, benefit from their greater fidelity the most. The subtle infections in singing take a new meaning when they aren’t being held hostage by an all-encompassing bass.

The amount of detail you can hear through these surprised us, outperforming most top-grade alternatives in that regard. Pretty much every note can be clearly heard from start to finish, which makes them good for many demanding tasks. The K701’s audio profile could easily find a privileged place in any home studio, or even in proper professional settings.

Sitting at 235g, they are rather light considering the kind of performance you’ll get from them. Their overall design is quite bold, but they look very good. The mostly minimalist take on the headphone’s frame makes them one of the most attractive sets we’ve had.

The 45 mm dynamic drivers are encased within the open-back cans, where the magic happens. On the cans, the 3D foam padding will give you ultimate comfort where it matters the most. Additionally, the pressure you should feel on the sides of your head while wearing them might as well be non-existing. Their fit is gentle, and you shouldn’t have any complaints even after a 10-hour recording session.

Besides, their frame is well-adjusted, neither thick nor too thin, and strong enough to withstand a couple of hits. Despite their deceiving appearance, they’re tough, as we could attest when we were doing our AKG K701 review. Many high-stress areas were thoroughly reinforced to ensure that we wouldn’t have anything to complain about in that department.

Initially, the AKG K701 headphones were sold for a bit less than $500 apiece. At the time they were considered to be worth it, as their success soon proved. Now, a few years have passed and the only thing that has decreased about them is their price.

They’re still the reliable and amazing-sounding alternative they’ve always been, but you can have them for a more affordable price now. And the fact that we’re still talking about them after all these years proves that they aged well. As it’s common in the upper hierarchy of headphones, high-end models are still better than most even a decade later. This proves that investing in quality pays off in the long run, as any audiophile would tell you.

However, even below the $300 threshold, they aren’t the cheapest alternative available. But they don’t need to be. Their value exceeds their pricing enough to be considered a steal in any case. It might be an investment, but a fairly small one that will ultimately be very profitable for you.

Although they could be considered the best headphones in many areas, these are certainly targeted to a particular audience. While Beats-enthusiasts might feel offended by the lack of an overwhelming low range, these work better in many circumstances. In particular, if you’re a professional or a passionate audiophile, you’ll know how to appreciate the K701’s sound.

Their nearly flat frequency response makes them a solid choice for a set of budget studio headphones. Although they aren’t exactly a cheap alternative, professional-level equipment can easily cost twice as much, which makes these a godsend. Similarly, any musician that wants to further analyze the intricacies of a well-composed piece will find them very appealing.

However, a fraction of the general public could argue that these could lack the thrill of a punchier bass. That’s understandable, given that most individuals haven’t had the chance of trying something different. Nonetheless, after giving these an opportunity perhaps they’ll start second-guessing that statement. In our opinion, they provide an exciting enough listening experience, but cleaner and more detailed than you would expect.

What brand is AKG?

AKG Acoustics is a company that manufactures headphones, earbuds, microphones, and similar gadgets for professional and consumer use. Currently, they’re owned by Harman Industries, a subsidiary of Samsung. Although they’re mostly known for their high-end headphones, they produce a wide assortment of products targeted at different demographics.

Is AKG a good headphone brand?

The brand has a long history producing state-of-the-art audio engineering solutions of every kind. Their headphones have been endorsed by the likes of Tiesto, Quincy Jones, and many others. Similarly, several of their models have been widely appraised by critics and consumers alike. Furthermore, they even won a Grammy Award for their work in the recording field.

Where are AKG headphones made?

For an audiophile, there’s hardly a better alternative than the K701. While we were writing our AKG K701 review, their fidelity felt closer to a studio experience than we had anticipated. However, they might not be for everybody, as they lack the aggressive bass response that’s on vogue nowadays. Nonetheless, they have remarkable overall performance, fidelity, and a great range, something that true connoisseurs will value the most.

Their open-back design might be slightly controversial, but in this case, it seemed to be for the best. Although we would have liked some degree of noise-canceling, they managed well enough without it. All things considered, these AKG K701 are a solid choice if you’re into the technical side of music.