What is a Parlor Guitar? Everything You Need To Know 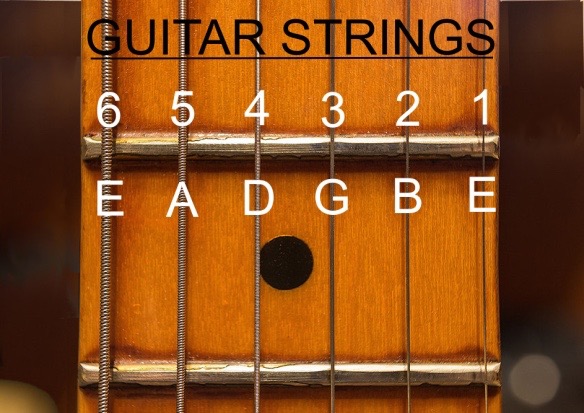 What are the Names of the Strings on a Guitar?

The first step to playing your guitar is knowing your guitar and the first thing you need to know are the strings on your guitar. When you look down at the fretboard you can recognize six different strings with different thicknesses, different textures, different sounds. In fact, these strings are differently wound too, some are extremely taught and others are comparatively loose. These strings can be made of either copper, steel, or other alloys like phosphor-bronze. They, each, hold a distinct and clear sound.

The first string from the top is the thickest string on a guitar and the next ones become significantly thinner and give a more high-pitched sound. Let us break these six strings and their functions down by name.

Suggested Read: Everything you need to know about Parlor Guitars

These are names of the open strings, this means that this is the note that is played when no fingers are put on the fretboard and the string is strummed. Once the strings are played by using the fretboard these become chords and the sound produced changes completely.

E String: The E string is the first string from the top, however, it is commonly called the sixth string. This gives a low-pitched volume.

A String: The second string from the top, and commonly called the fifth string.

D String: The third string from the top, it is known as the fourth string.

B String: The fifth string, or the second last string from the bottom.

It is important to memorize all the string names, alongside the numbers given to each string. As these are the foundations for the chords with which songs are played. An easy, and common way to memorize these strings is by using a quirky sentence. For example:

Easter Bunnies Get Dizzy At Easter.

The initials of every word in this sentence match with the names of the strings from top to bottom.

These strings can also be tuned differently, this means that oftentimes, depending on the piece being played, sometimes the E string is tuned to play D and other such variations are used. Another reason to have a clear understanding of the strings is that, in the absence of a digital tuner, the strings are often tuned on the basis of the sound of the string above. For example, G is tuned by playing the D note and setting the pitch accordingly.

Knowing these six strings and recognizing the difference between their sounds must be the first step in the process of learning guitar, as these are the building blocks for mastering the art of playing guitar.