What Is A Fret On A Guitar

How To Remember The Strings On A Guitar

How Much Does A Guitar Setup Cost 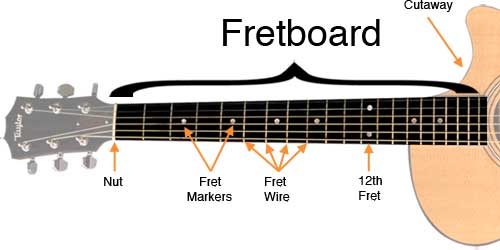 What is a fret on a guitar

Frets are essentially slim metal strips fixed on that side of a guitar’s neck where its strings are. They’re used to mark the place of a note played on the guitar. However, areas between two strips are commonly called frets too.

Frets are located down the length of a guitar’s neck and the beginning of its body. Consecutive frets raise the previously played note by a semitone. Since there are 12 frets on a guitar’s neck guitar players can play an entire scale starting with strumming an open string and finishing by pressing on the twelfth fret.

The players might play on one of the frets by pressing the string against the guitar on that spot. This reduces the string’s vibrating length to the length between the bridge and the fret next to the one that’s pressed upon and between it and the bridge. The math behind the size of the fret and its distance from the bridge makes sure that the ratio of the distances of two consecutive frets is always the same. This is how frets are designed to work on most of today’s guitars. This makes the guitar’s intonation be equal tempered. In other words, this means that each fret produces a semitone when the string is pressed upon it. There are, however, many instruments which are not equally tempered.

Suggested READ: How Much Does A Guitar Setup Cost

Guitars are usually fretted with fan frets. These frets are parallel one to each other and are perpendicular to the neck of the guitar. However, there are some other fret installations that are also used. One of them is having scalloped frets. The fretboard is scalloped when all or some of the wood between the fret is removed. This can help players to bend or vibrate the string easier because the string doesn’t touch the guitar’s neck. Aside from fan and scalloped frets there are also fat frets. These frets are intentionally wider so that they can alter the bending and last longer.

There are certain issues related to guitar frets. One of them is that frets start to wear down when players use the guitar for a longer time. In most cases the guitar will need a fret dressing meaning that the frets will have to be polished and put back to their original position if dislocated. However, if they cannot be repaired, frets will have to be replaced with new ones.

Worn down frets can cause fret buzz or an unwanted buzzing sound that is produced when the string is pressed upon the fret. This happens when frets are worn down or torn and can usually be fixed easily. However, buzzing can be something intentionally incorporated when playing.

Frets serve its best when the guitar settle, the nut, and the strings’ tension are properly adjusted. Players decide how to best position and manipulate these elements. This helps them achieve the wanted sound effect. Also, it is important to take proper care of the guitar to avoid fret damage.